In a place close to the heart of many Sabahans, five prominent Non Governmental Organisations (NGO) have united to form a coalition named ‘Sabah Unite to Re-Power the Future’ or Green SURF, to oppose dirty energy such as coal-fired power plants.

UNITE for a greener SABAH! 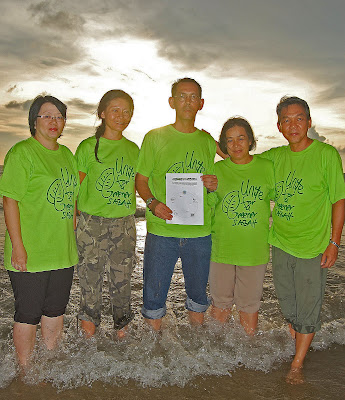 With water up to their ankles to recognise climate change, the core Green SURF coalition members hold-up the document signifying their coming together to fight against climate change. From left, Anna Wong, President of the Sabah Branch of the Malaysian Nature Society; Cynthia Ong, Founder and Director of LEAP; Rahimatsah Amat, Chief Technical Officer of WWF-Malaysia’s Sabah Office; Anne Lasimbang, Director of PACOS Trust and Wong Tack, President of SEPA.

Kota Kinabalu, 31st October 2009: In a place close to the heart of many Sabahans, five prominent Non Governmental Organisations (NGO) have united to form a coalition named ‘Sabah Unite to Re-Power the Future’ or Green SURF, to oppose dirty energy such as coal-fired power plants.

The coalition aims to present positive solutions to the current energy situation in Sabah. “It’s time to promote and provoke a paradigm shift in thinking about the future of energy in Sabah” said a representative of the coalition.

“Sabah has been the leader in conservation work in the region and we even have world-class laws such as the Environmental Protection Enactment, which is why Sabah should be an example in the region for focusing on climate change and taking action to ensure that our energy needs are addressed in a clean manner,” stated Green SURF at Tanjung Aru after a brief signing ceremony which was attended by members of the public as well.

Green SURF is calling on everyone in Sabah to sign a petition to show their concern on climate change with specific emphasis on the planned coal-fired power plant.

“We also want to emphasise that this core group of five NGOs have come together to form the Green SURF coalition because of calls and request from members of the public to offices and also having approached us at various events. We are doing this because of their constant urging,” stated Green SURF.

According to Green SURF, a webpage set up on social networking site Facebook has garnered 1,000 members within two weeks.

“That means about 70 people are signing up daily. We also want to encourage members of the public to visit www.nocoalsabah.blogspot.com which has a link to the Facebook page to find out more about the issue as well as signing the online petition,” shared Green SURF.

Sabah is a place envied in the region for its natural wonders - the sea to the mountains and jungles.

Having a coal-fired power plant is also not inline with management plans such as the Sabah Shoreline Management Plan nor with the Sabah Development Corridor as Sabah aims to be the most liveable place in Asia by 2025.

“Sabahans value this and do not want to risk damaging this ‘Gift from God’, to now bring in a coal-fired plant would damage the world class conservation reputation that we have worked so hard for,” stated Green SURF.

Green SURF also urged the Federal Government to consider developing one of the two budgeted green pioneer townships with green technology in Sabah.

“We applaud our Prime Minister for having the foresight of planning these green pioneer townships and we request that East Malaysia also has one and we recommend that the Government consider one of our East Coast townships such as Sandakan, Lahad Datu or Tawau,” stated Green SURF.

Green SURF also hopes that companies in Sabah will take up the green technology funding allocated in the Budget a week ago.

This December, all eyes will be on Copenhagen in Denmark where countries will be meeting for the United Nations Climate Change Conference to discuss what will become the replacement for the Kyoto Protocol which runs out by 2012.

“At the same time here in Sabah, we will be having a Green Celebration scheduled for December 12th at the BB Café along Jalan Pantai in town, more details will be available on the blogsite,” said Green SURF.

Climate change is a reality. Today, our world is hotter than it was two thousand years ago. By the end of the century, if current trends continue, the global temperature will likely climb higher than at any time in the past two million years. We must act now, not in a decade, but now.

“Sabah is at a crossroads and decisions we make now will forever have an impact on this State, let us make the right choices for climate change and become a world class model of green energy,” concluded Green SURF.

While coal technology for power generation is damaging and dirty (to quote the PM himself) for Semenanjung, it's being pushed down Sabah rakyat's throats by none other than TNB itself, with the announcement of the plant at FELDA Sahabat coming from none other than the same PM....does he know what he's talking about?

KUALA LUMPUR, Oct 31 — Prime Minister Datuk Seri Najib Razak admitted today that the government needs to revise its energy policy, calling the current one obsolete and in need of a revamp.

In his keynote address at electricity utility TNB's 60th anniversary celebration here, he said the current policy was proven to be costly, both environmentally and financially.

Heavy dependence on independent power producers (IPPs) and costly natural resources like natural gas have taken its toll on the government financially while cheaper options like coal is damaging to the environment, said the prime minister.

"I don't like the current energy policy. It's not right," he told some 1,500 TNB workers attending the event.

"We are overly dependent on the IPPs and expensive resources like natural gas to produce energy and coal is what we call dirty technology, it's not environmentally friendly," he added.

Relations between IPPs and the government have not been good in recent years.

Many leaders from both sides of the political spectrum are calling for the government to be firm with the IPPs which they claimed have been stepping on its toes by providing energy at high prices.

Later at a press conference, Najib said the government had begun embarking on a new energy policy that he claims would be focusing more on cost-effective resources.

As revealed in Najib's maiden Budget recently, the prime minister told the media that his administration had started studying sectors like renewable energy and green technology to replace the current policy.

"It's not a short-term solution, it's a long one but we need to make the first step," he said. 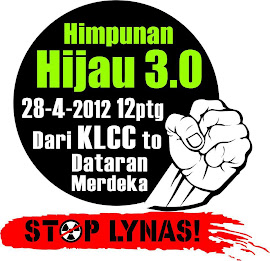